Tired of dancing to someone else's tune? No autonomy? No freedom?
Isn't it enough that we struggle with the stress of traffic just to get to work? Then we become stressed out once we are there.
Well, you know what you've got to do.

Tired begging for more money?
There only seems to be enough to pay the bills and squirrel away a bit of cash for a family vacation once or twice a year. Where will that leave us 10, 15, 20 years from now? Time to start your own business and set aside chunks of cash for the future.

There are many ways to promote your business. One of the smartest ways to get your brand recognized is to make sure its everywhere. Providing your valued customers and clients with personalized items which feature your company name, message and logo imprint is a cost effective way to do this that has a high ROI (return on investment). Our Signature Promotional Products Collection catalog features a wide range of promotional items that will fit with any company image, whether you’re looking to provide your business associates with coffee mugs, personalized pens, or even custom balloons.

Get your FREE printed catalog go to http://www.doncrupi.com/get-more-info

One of the advantages promotional products have is that just one item can deliver a message for a far longer time period than other forms of advertising. Advertisers can reinforce their brand or a call to action for an average of nearly six months, and even longer on some products such as outerwear or mugs.

Don Crupi Promotions; your Stealth Marketing Specialist ™ is dedicated to providing exceptional quality, incredible value, and world class service. We offer the absolute best prices in the promotional advertising products industry. Whether you are a one-person operation or a multi-million dollar corporation, we can provide you with excellent advertising items. We feature a wide range of items, from inexpensive promotional tools for trade shows to high-quality corporate gifts and promotional giveaways for your most valued clients.

Selling Pork In The Heart Of Beef Country

Anything is possible…with the right campaign.

*
Alberta Pork wanted chefs to share their passion for pork, as well as their recipes on how to prepare this meat. The Passion for Pork campaign, which began in April 2012, included a website and over 900 television spots. This created major awareness for the website with 300-400 visits a day. However, as soon as the television campaign stopped, the daily hits dropped to 50-70 visits a day.

To reinvigorate the interest in pork at the consumer level, Alberta Pork reps contacted their Stealth Marketing ™ partner, who suggested an embroidered chef coat and flexible cutting boards imprinted with the Passion for Pork logo to be given away at various events. As distribution of the cutting boards was underway, a few people provided feedback that they planned to use the cutting boards as place mats.

One event was a high-profile dinner in Edmonton that attracted more than 1,400 diners where chefs clad in their logoed chef coats prepared favourite dishes from the region. The Passion for Pork cutting boards were set out as place mats so people could take them home afterward. The promotion went over extremely well.

The campaign also went viral. Alberta Pork started receiving fun and crazy photographs of people posing with the pig cutting boards in a variety of costumes and locations. Alberta Pork is using the photos on its websites and promoting them through social media to increase demand for the boards.

Website visits have again increased and at a much lower cost than buying television spots.

Stealth Marketing ™ is one of the most effective and valuable ways to build and grow your business. In fact, according to recent surveys, your message will remain in your prospects hands, at the office, in their car or in their homes for over 5 to 7 seven months.

Fighting Hunger with the Help of Promo Products

Fighting Hunger with the Help of Promo Products 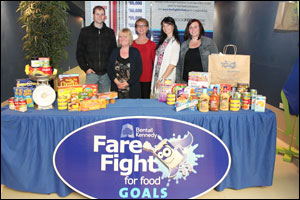 Bentall Kennedy, one of North America’s largest real estate investment providers, was determined to make a difference in the communities in which its employees live and work. In Canada, food bank usage is on the rise, so leaders of Bentall Kennedy made it their mission to raise awareness about hunger in their communities and across the country.

In February 2012, they launched the Fare Fight for FoodChallenge, a national initiative that partnered their 19 shopping centers across Canada with local food banks. Bentall Kennedy created the slogan, and their distributor partner sourced useful products to showcase the campaign message in a highly visible way while aiding the teams with their mission. The initial goal was to raise a total of $75,000 and collect 20,000 pounds of food.

From February until October, shopping center teams hosted special events and promotions. Teams competed to raise the most money, pounds of food and online supporters. The target audience consisted of all of the shopping center customers, Bentall Kennedy employees, suppliers and the general public. 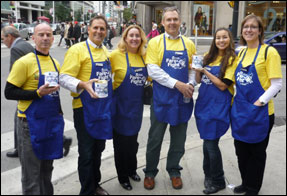 To launch the campaign, six fundraising street teams – including the entire Bentall Kennedy retail division – invaded downtown Toronto for an afternoon. Teams were given a survival kit that included donation cans, aprons, candy and a bottle of water. One team’s adventure generated $30,000. To enhance the competition, the top five teams overall received an additional $10,000 grant from Bentall Kennedy’s head office for their food bank.

Promotional products printed with the Fare Fight for Food logo were created as practical tools to reinforce and support the campaign. Bags were given out at the store level and delivered door to door. Donation cans were used for the original launch and then reordered for individual stores, entrance tagging and 50/50 ticket sales. Aprons were worn by the Bentall Kennedy teams, retail partners, dignitaries and even the prime minister. Cookies were distributed to thank customers and to extend awareness of the campaign.

Bentall Kennedy exceeded its original objectives halfway through the campaign. By the end of the campaign, teams raised $155,000 in funds and 150,000 pounds of food donations – more than double the amount of money and 7.5 times the amount of food projected. More than 19 food banks across the country are the beneficiaries of this campaign.

If you’d like to get involved with a community outreach program or some other charitable cause, contact Don Crupi Promotions for advice and products for your campaign.

Best-known for carrying books and binders in grade school, the beloved backpack has resurfaced as a trendy bag option. Conveniently hands-free and large enough to carry all the essentials, backpacks are leaping off the school bus and popping up on the street.

Stylish, functional and extremely versatile, the backpack is truly one bag that is perfect for everyone. The standard backpack with multiple compartments is great for schools because it is durable and large enough for any load of school supplies. Sports teams look to drawstring cinch-topped styles because they are lightweight and easy to open and close. The canvas rucksack-style backpack is best for camping and other outdoor activities because of its breathable cotton material.

Back to school is back to work, let it work for you!
As one of the most travel-friendly bags, backpacks are smart promotional tools because of the sheer visibility these bags will have to potential customers. Backpacks also lend themselves perfectly to decorating and embroidery because of the size of the bag and the open space that is available to decorate. These bags are designed with decorating in mind, which ensures that your logo is being showcased all over town with traditional silkscreen, transfer or embroidery.

Your Logo Billboard will be seen each and everyday on the back of that bag.

As the workforce becomes more casual and mobile, businesses are shedding typical briefcases and swapping them out for backpacks. The trend is for a lot of diversity in the companies and industries buying backpacks, from schools and hospitals to Fortune 500 companies. For those that travel, a backpack is a more sensible choice, as it can hold more while being much more comfortable than carrying a shoulder bag or business case.

Back To School Special:

Start living the life you were meant to live.Leave all the stress and daily grind behind. Break through the false limitations we've placed on ourselves.
It's never been easier to open your own business. We have an Instant Turn Key On Line Business just waiting for you!

Earn While You Learn

Our proven business package with initial training and support will have you open for business the very day you decide to become your own boss.
We help you as much or as little you wish. We are just an email away. You may be in business on your own but never alone. Support is always available.